The popularity of wines from Mount Etna, the very active volcano in Sicily’s north-eastern corner, has exploded in the last few years. It is now one of the Italy’s hottest wine regions, and the darling of sommeliers around the world, for good reason.  The volcanic soils, high altitudes and pre-phylloxera vineyards create wines of intense minerality, pure, bright fruit, and lightness of texture.  The reds are often compared to Burgundy, but the whites, comprised of at least 60% Carricante, an indigenous grape variety with a distinctive stony quality, are unlike any other.

Ciro Biondi, whose family has farmed vineyards on the south side of the volcano since 1693, is one of my favorite Etna producers.  He works naturally, not because it is trendy, but because it is how his family has always worked.  He avoids chemicals and irrigation in the vineyard, and manipulations in the cellar.  Ciro’s ‘Outis’ white is 90% Carricante, blended with Malvasia and Catarrato Minella, two local, more aromatic varieties.  He presses whole clusters, then transfers the juice to stainless steel.  The result is classic Etna – structured and savory, with smoky, flinty notes, and a subtle salinity on the finish – and more than holds its own with food.   I love it paired with the Sicilian Pasta – its pure alchemy when the strong flavors of caper, anchovy and tuna go up against this quietly assertive wine.

Ciro (an architect by training) and his lovely British wife Stef own three vineyards near the small town of Trecastagni, where I had the good fortune to visit them three years ago.  We barrel tasted in the ancient cellar, walked the vineyards and enjoyed a magical alfresco dinner (and lots of great wine) in the Cisterna Fuori vineyard.  There was an aha moment, somewhere after the third or fourth bottle, sitting around the stone table, surrounded by ancient vineyards, discussing with Ciro and Steph the reality of living with the volcano – I GOT it, the wine’s sense of place!  And I’ve been hooked ever since…

If you can’t find the wine, message me, I’ll help direct you!

Fun fact: “Outis” means “No one” in ancient Greek.  Ulysses told the cyclops his name was Outis before getting him drunk on undiluted wine.  This helped him later escape after stabbing the snoozing cyclops, who awoke screaming, “No one is hurting me!”, and failing to alert anyone within earshot that he actually needed help. 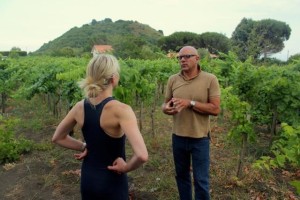 With Ciro in the Cisterna Fuori vineyard 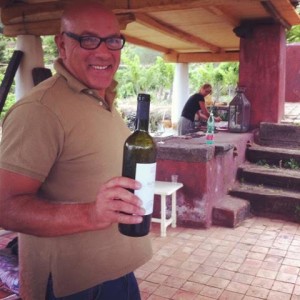 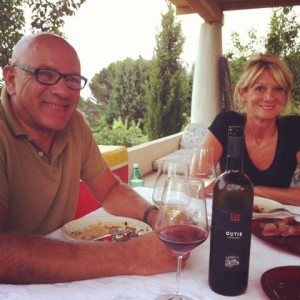 The ultimate hosts, Ciro and Steph

Back to Wine With Dinner